The Geostuff Borehole Geophone can be used for a wide variety of applications: shothole logging, static corrections for petroleum shearwave reflection surveys, crosshole, tomographic, seam wave, and shallow VSP surveys for coal, minerals, and rock mechanics. It is used most commonly for downhole shearwave surveys for shallow velocity measurements.

Shearwave velocities are one of the more useful engineering properties of soil and rock because they are closely related to the shear strength of a material and shear strength is what supports structures. According to the Uniform Building Code and International Building Code, building sites need to determine the average value velocity of the top 30 m (100ft) so that engineers can design the buildings as needed to resist natural disasters such as earthquakes. Therefore, engineers use a borehole geophone and seismograph to determine the average velocity and compare it to a chart to determine the necessary build parameters.

Geostuff’s Borehole Geophone (Model BHG-2) is a 3-component geophone in an X-Y-Z orientation with an outside diameter of 1.85 inches (47 mm), which is small enough to fit inside a schedule-40, 2-inch plastic pipe. The standard clamp mechanism works for holes between 2 and 6 inches (48-150 mm.) It clamps using a steel spring compressed by a a DC electric motor.

The BHGC-1 Controller powers the clamp mechanism and there are switches to assign each component to a different channel on the seismograph. The polarity is reversed to release the clamp. The controller requires 24 volts DC power with cables up to 200 meters length, or more voltage for longer cables.

The standard geophone is a high-output 15 Hz frequency that can operate in the vertical or horizontal orientation.

Shearwave velocity is usually measured with a borehole geophone in one of two methods: downhole or crosshole. The downhole method uses one borehole geophone, which is clamped in a borehole. A planked, usually weight by a vehicle, is struck on both ends. Then a plate on the ground is struck to produce compressional waves. The triaxial geophone package is moved a short distance and the whole sequence repeated until records have been obtained at intervals from the surface to the depth of interest.

The crosshole method involves one or two borehole geophones in separate boreholes. Two or three boreholes are drilled approximately 10ft apart. A borehole geophone is clamped in one borehole and a downhole shearwave hammer such as the Ballard Source is clamped in another. The hammer is a special tool with a sliding weight that can bang downward (as the weight is allowed to drop) or upward (as the weight is pulled upward with a cable) to create two shearwaves of opposite polarity. A pair of records is taken, each with different first motions of the source mass. This process is repeated at different depths so that shearwave velocities at different layers can be calculated from the distance between the holes and the travel time. 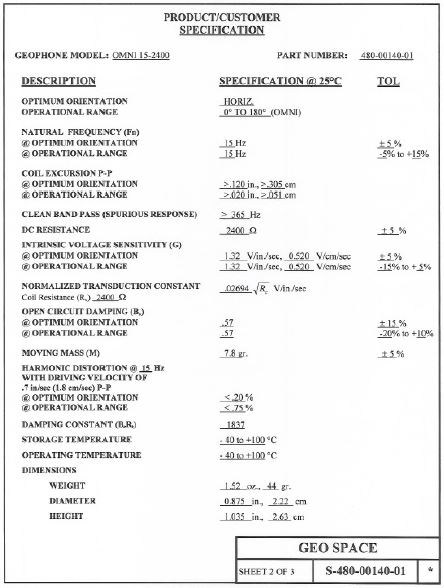